Downey produced the mini-series The Bible that aired on the History channel, and we got a chance to speak with her during the red carpet event at the 22nd Annual Movieguide Awards – Empowering Epics. The mini-series that reached an audience of 100 million viewers was a dream no one on her team had dreamt. Downey and her team also put together a standalone movie, The Son of God, that opens to 3,000 theaters around the United States. We asked Downey her thoughts on the series Touched by an Angel (1994 – 2003), where Downey stared as one of the lead characters. She states, “… It was such a privilege for me as a believer to be the messenger.” For her Touched by an Angel fans she responds to the question of what type of coffee drink she prefers at the moment is, “A low fat latte with extra foam.”

Host: Were you surprised on the explosion, reaction and fan appreciation of the Bible series when it first came out and hit number one?

Roma: Well, you know, we had hopes that the Bible would reach a huge audience but the fact that it reached 100 million people, was like a dream we almost didn’t dare to dream.  But more than that, it’s been touching people’s lives, It’s been bringing alive the message of the Gospel, and we are just very encouraged.

Host: Is there any other chance, any other books will come to the big screen?

Roma: Well, we have put together the Jesus narrative from the Bible series into a stand alone feature film experience called Son of God which opens Feb 28th in 3,000 theatres around the country.

Host: Lets talk about your iconic role in “Touched by an Angel”, do you still get a lot of people coming up to you?

Roma: I absolutely do.  You know, TBAA continues to run in re-runs and it was such a beautiful series with a message of love at it’s heart and it was such a privilege for me to be the messenger.  And I’m still very good friends with Della Reese.  And it was really a wonderful time in my life.

Host: Any chance it’ll come back as a tv movie or a series?

Roma: I mean, listen… never say never.  I think there’s a timelessness and a universality to it and I certainly think we could use a show like that on television.

Host: And one last question for your TBAA fans: Coffee, Java, Mocha, Latte or Cappuccino? Which one is it?

Roma: Well my favorite at the moment is a low fat latte with extra foam. 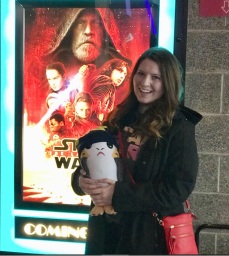 Rachel Heggenberger | Writing Contributor
B.A | Communications | San Diego Christian College
Who is Rachel? She is a Jedi Master who adventures in Narnia; helps the Avengers overcome their latest adversary, and visits with Hagrid on the weekends. However, that is just her day job. Rachel grew up in tiny town, but always had big city dreams. She graduated in 2018 with a degree in Bachelor of Arts in Communication from San Diego Christian College. Her love for nerdy movies, books, and television shows fuels her desire to work in the entertainment industry. Rachel often writes reviews and critiques on movies she has seen. She is a full-fledge Star Wars nerd and thrives off of listening to videos, podcasts, and breakdowns of the latest nerd/comic movie. Rachel loves talking with others about the latest movie or television show, and would love to one day have her own video show! Find her on Instagram @rachel.nicole_95 | View My Blogs