Visnjic is adamant that this second season is better than the first. The characters are more grounded and the storytellers focus on giving back to the fans, making the show smarter but more fun at the same time. The Timeless cast and crew had finished shooting the season finale the morning before he kindly gave this interview, but he battled the lack of sleep humbly, instead choosing to express how much he loves working with a cast of friends. Down to the nitty gritty of season 2: the journal. Flynn knows that Lucy gave him the journal in the future, which is why he gets reckless with it. In most cases where the journal is involved, the story asks more questions than it answers. One thing we do know for sure is in the future within the show, there will be more advanced time travel technology. Visnjic admits that Lucy and Flynn do a lot of unsaid things, but they let audiences ask a lot of questions. Switching gears away from the show, Visnjic discusses the differences of shooting in LA instead of Vancouver. Though Vancouver provides better seasons and some better locations, LA has different locations and allows the actors to be closer to their families. Lastly, Visnjic’s favorite episode of season 2? A tie between the season finale and episode 4, Salem. 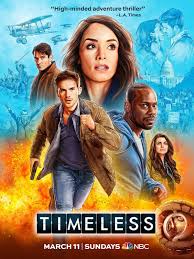