It was quite the trip! Hotel Transylvania 3: Summer Vacation – brings to the screen what Mavis and her family dream of – a luxurious fun-filled vacation heaped in love, excitement and adventure, but unfortunately their good times change in a heartbeat when a secretive evil plot unveils – to do away with them all.   Dracula, (Adam Sandler) Drac’s, nemesis, Abraham Van Helsing, (Jim Gaffigan), a vampire slayer (thought to be long gone) – immerses with a careful plan for Drac’s final demise on a luxurious cruise ship.  Van Helsing’s plan also includes Drac’s entire family and monster friends by enticing them all on this summer vacation at sea.

Drac’s daughter, Mavis (Selena Gomez) organizes this dreamy cruise ship vacation after seeing an ad on TV.  She wants to include all of their monster friends and family to take a break from the hotel.  Drac is reluctant, yet he is convinced to leave the hotel and leerily boards the monstrous cruise ship to travel from the Bermuda Triangle to the lost city of Atlantis. Eager and excited they all take off on this ocean get-away, and especially Mavis. 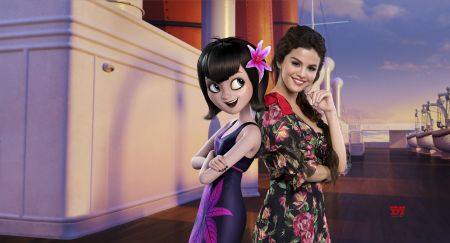 Mavis convinces her father, Drac that he has been working too hard for the past century since her mother died and she really wants him to make more time to “bond” with his grandson, Dennis (Asher Blinkoff) and her husband, Johnny (Adam Samberg). However, Drac reveals to his friends that he is really just lonely and misses the “zing” he once felt for Mavis’s mother. 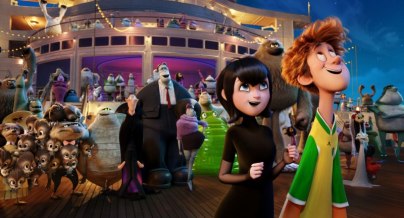 Once the monster clan embarks on the colossal vessel, The Legacy, which includes: Frankenstein, “Frank” (Kevin James), Eunice, Franks’ wife (Fran Drescher), Blobby (Genndy Tartakovsky), Vlad, Drac’s father (Mel Brooks), Werewolf “Wayne”, Steve Buscemi, Murray the Mummy (Keegan-Michael Key) et, al., we find Drac mesmerized by the enthralling entrance of the ship’s Captain, Captain Erika (Kathryn Hahn).  She dazzles him with her style and beauty and in each encounter, we find Drac is not aware at all of her attempts to do away with him.  Blinded by “love at first sight”- a “zing”, Drac is oblivious to Captain Erika’s programmed way of thinking of having him killed.  In fact, she has been advised by her great grandfather, Van Helsing to destroy them all – (the reason is – that humans always destroy monsters). Despite many conflicts, humor rings throughout this movie as Drac’s fun monster pals encourage him to look for love.   But, Mavis has her suspicions regarding Erika and is worried about her father’s newfound infatuation with this lustrous Captain of the Ship.

One perilous moment after another, Drac, Mavis and the monster gang encounter intentional mishaps and just when you think these mishaps are over – at the lost city of Atlantis – at the all-night music festival, we witness Erika searching for a secret weapon in treacherous territory.  Drac follows her and c saves her life once again – one peril after another. Finally – through her persistency she finds the treasure, the secret weapon, with the help of Drac.  (He does not know that this treasure, the secret weapon will destroy them all).  Van Helsing demands to have the weapon and willingly she hands it over.  But her heart starts to change towards Drac when it is revealed to Drac that she is the great granddaughter of Abraham Van Helsing.  Van Helsing shows himself and begins to play his music through the use of the secret weapon. A horrendous creature from the sea immerges and once the music of Van Helsing starts to play – the creature begins an attack on all the monsters.  Johnny figures out that he needs to play different music to change the creatures’ mood.  Soon there is a battle of the two DJ’s – Johnny as one DJ and Van Helsing as the other; both spinning their dueling songs and they compete for the sea creature’s mood – good vs. evil.   Each song selected by both takes over the creature’s state of mind and Johnny and Drac come up with one more hit song to save them all.   In the end, the last song that Johnny plays, “Macarena” wins the hearts of everyone and judging by the little girls dancing in the aisle of the theater to this hit dance song – it reaches the inner dance souls of many.  Both Drac and Erika find their “zing” – in one another – which in monster language is another word for “true love”.  And Van Helsing decides to make peace with the monsters.

This movie delivers good hearted fun with loads of humor and great animation for children and parents alike – but it also provides a thought provoking message – one that we should all embrace which is: to find love in others and show tolerance for one another – no matter how different we all may be. This story brings laughter and a moral in tough times when we could all use a huge dose of civility and compassion for others. 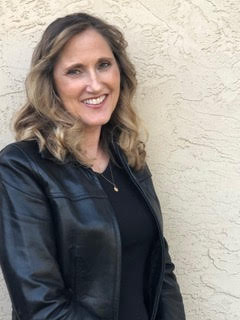