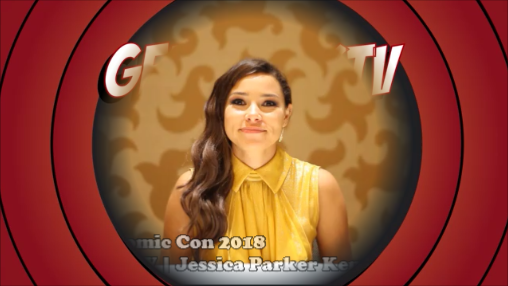 Jessica Parker Kennedy sat down with GeekRockTV to discuss all things Flash, acting, and TV. Something we learned is that Kennedy was not a fan of comic books or the show itself before joining the cast. Joining The Flash was one of the best choices she has ever made though! It opened her eyes to the world of heroes and she is grateful for the legacy she gets to leave behind. She spoke a lot about her character Nora, who is a silly, awkward, goofy, and a youthful woman whose going to continue to make mistakes in the new season. Her youthfulness is going to allow her many adventures. At the end of season four, Nora messed with time and made a terrible mistake she must deal with this fall. Kennedy thinks the mistake was made because Nora is fast and doesn’t stop to think about her actions. This season she hopes she’ll be able to get one on one time with everyone in the cast, but understands it’s hard because her character is heavily involved with her parents. Speaking of parents, she hopes to remedy her relationship with her mother. Nora is a daddy’s girl, but still wants a relationship with her mom… Eventually. At the end of the day, Kennedy is so happy that the cast and crew welcomed her to the show. She loves the Flash because it is a funny, silly, serious show with high stakes that deals with reality. As an actor she wants to do the best job possible to make everyone happy, including herself.