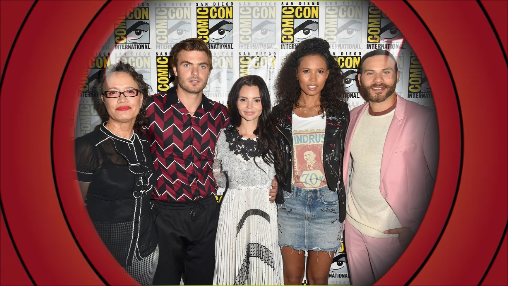 GeekRockTV sits down with Siren’s Ian Verdun, who is later joined by Rena Owen, to discuss the upcoming season of the Freeform hit series.

First and foremost, Verdun wants to make sure we know that everything he says is conjecture, or his own hopes for the series and his character. “We don’t know anything until the script shows up,” he laughs. He does hope Xander finds some love soon, though. In the middle of our discussion, Rena Owen walks up. Everyone is enjoying the con so far – it is work, because of their busy appearance and interview schedules, but they love it. The actors tell us that they have gotten the first script of season 2. The only thing they can tell us about it is that it’s exhilarating. Just like the first season, we’re thrown into a story that just goes whether we’re ready for it or not. They assure us that it is a great episode, and it has to be to keep up with the incredible precedent from the first season. One final question before they have to leave: will Siren “jump the shark,” as they say? We don’t think so! The actors are confident in their series. Shows tend to jump the shark because they ran out of steam, but we have so much to explore within the world of Siren that, if it ever happens, it will be a long time from now. This upcoming season, they mention, will continue Siren’s tradition of great scripts and a great cast. There are new moves to be made, new characters to meet, and new stories to unfold. With so many places to go, there’s no way the writers will lose steam just yet!

Will the show jump the shark? Don’t think so. Great scripts, great cast – more moves, new characters, backstories, continuing stories. When they jump the shark they ran out of steam, we have so much more to explore. So many places to go.

Fresh off the heels of their first season, the cast and executive producers of Freeform’s hit mermaid drama Siren make their San Diego Comic-Con debut, recapping season 1 and revealing what fans can expect from season 2. In this epic tale, the coastal town of Bristol Cove is turned upside down when a mysterious girl (Eline Powell) appears and begins wreaking havoc on the small fishing town. Using their resources, marine biologists Ben (Alex Roe) and Maddie (Fola Evans-Akingbola) must work together to find out who and what drove this primal hunter of the deep sea to land. Panelists include executive producers Eric Wald and Emily Whitesell, with series stars Eline Powell, Alex Roe, Fola Evans-Akingbola, Ian Verdun, and Rena Owen. Moderated by TLC’s Chilli. | Siren