After finding out that they want to kill her, Ruby Daily, 16 years old, escapes Thurmond, a place where a brutal government keep children against their will.  This facility is known as a “rehabilitation camp” and created for children who survived a deadly disease known as IAAN.   These children who somehow manage to survive IAAN, develop super abilities and powers – and Ruby’s power is rare and extremely lethal. 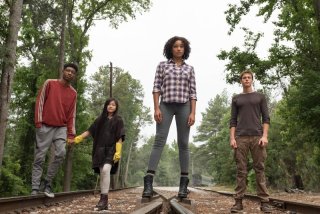 In Ruby’s, (Amandla Stenberg) struggle to find a safe haven, she also finds others who have survived and escaped the camps.  On the run, she joins a group of kids who are looking to form a resistance against the government. Her new companions, Zu, (Miya Cech) a young girl with deep dark fears, Chubs, (Skylan Brooks) a brainy nerd, Liam, (Harrison Dickinson) a fearless and caring leader (who falls hard for Ruby) become like family.

Ruby’s new friends band together to keep themselves alive while questioning why the government wants to control them or worse kill them.   They all have different powers and abilities – but Ruby has found out that her power is dangerous and deadly. Known as “orange” she is alarmed to find out that her power can kill anyone without her control.  Ruby is very fond of Liam, but she must keep him at bay for fear she could cause harm to him – if she gets too close. 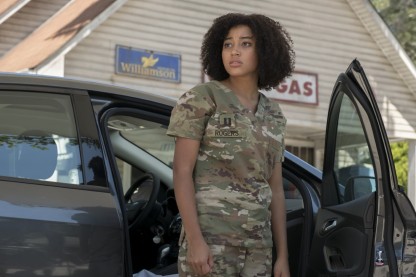 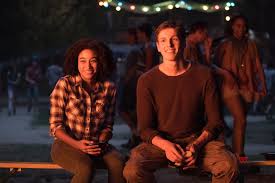 While they journey to the East River where they are told there is a safe haven – they must also evade another group of previous captors (survivors).   This group of survivors will stop at nothing to make Ruby use her powers in their fight against the government.  Ruby knows that there is a lot riding on her shoulders and her next decision could be crucial – for all of them.

“The Darkest Minds” is based on the first in a trilogy of books by Alexandra Bracken. It’s a movie that reminds me a little of “The Hunger Games” meets the “X-Men” with a trace of “Twilight” in it.  The entertainment in this movie is definitely geared for young tweens and teens and has a hint of romance.  I feel a movie sequel in the works.