Crazy Rich Asians is a wonderful spin on a classic tale of meeting the in-laws. If you watch the trailer, you know exactly what this film is about. If you even think twice about its title, you will also know exactly what this film is about. But the beauty in its storytelling is in how it is told, and how we find out just how crazy and just how Asian Nick Young’s (Henry Golding) family is. It isn’t just about meeting the eccentric and posh relatives. It’s about butting heads with your culture and being a stranger in a land you should be able to call home. 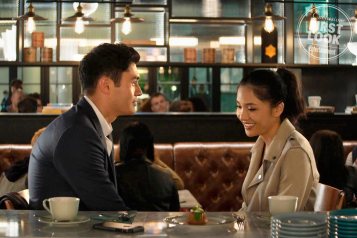 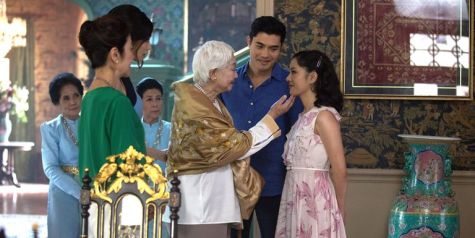 (FIRST OFF: This movie is so beautiful and the production design is so breathtaking— if you can’t afford to go anywhere this summer but would still like a treat, take yourself to this movie. You see locations outside of New York and LA and will be absolutely mesmerized by the beauty and culture that exists outside of our 50 states. Trust. Such a visual treat. And it only costs a few bucks at the theatres. Get your money’s worth.) 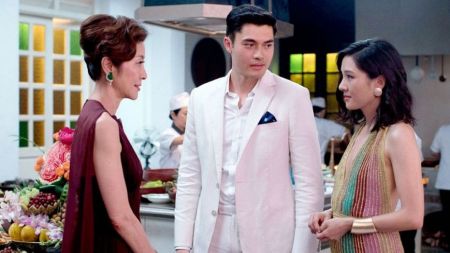 Crazy rich is an adjective phrase that doesn’t do justice to the wealth Nick’s family has accumulated over the years. They aren’t just rich. They are the biggest developers Singapore has ever seen, their business an empire and their household the royalty that every family, new or old money, aspires to be. 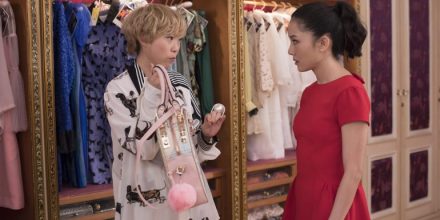 All of which Nick conveniently neglects to tell his serious girlfriend of 1-year, Rachel Chu (Constance Wu) when he invites her to Colin Khoo’s (Chris Pang) wedding in Singapore. Rachel’s first exposure to this wealth is en route to the wedding, where she and Nick have been bumped up to first class with a private suite and a glass of wine as their beverage of choice. Rachel, ever the practical NYU economics professor, furtively whispers to Nick: “Honey we can’t afford this this.”

Hunty. He basically owns the plane. But that’s beside the point. He can afford this and a lot more than he wanted to say, because he says it isn’t his money, it’s his parent’s. This money is not how she knows him. This is just money. Paper with numbers. Not him. And she gets it.

They have a wonderful flight and Colin and bride-to-be Araminta Lee (Sonoya Mizuno) meet them at the airport and they go around exploring the town, gracing us with a wonderful scene of Asian street food galore and the diversity running rampant in this international city. It’s that teen scene in every adolescent movie when the protagonists wave their hands in the air and they enjoy the feeling of just being alive and being young. And just like every other teen scene, this is the calm before the storm, a happily ever after to tease us with before the sh*tshow of the extended family hits Rachel, and us, in the face.

And hit us it does, with a subtle antagonism against Rachel that questions her identity not in her being Chinese, but in her being Chinese-American, in her assumed inability to fulfill the roles of a matron of the Young household, in the fear that this lower-class American will end up being a gold-digging leech. Throughout the film Rachel is treated as an outsider, someone who cannot possibly understand the sacrifices Eleanor Young (Michelle Yeoh) has made for Nick and her family, and Rachel is patronized by all those of the elite class. Which is all of Nick’s family.

From cruel, baseless taunts, a dead fish in her bed, and a verbal attack to her mother and her family, Rachel just about has it. As much as she loves Nick, these attacks from the people he loves and cherishes is just about too much…until Goh Peik Lin (Awkwafina), Rachel’s charismatic and comedic friend from NYU who happens to live in Singapore, tells her to fight back and stand her ground. Let the extended family know that this American is more than the stereotypes they have put on her. And fight back Rachel does, not with violence, but with wit and charm and the knowledge that whatever they may throw at her, it is no match for her love for Nick.

Which is her downfall and her saving grace, the Catch-22 that makes this such a compelling story. At the end of it all, Rachel loves Nick more than anyone, more than his mother, more than his grandma (Lisa Lu). For Rachel, his love isn’t something she is willing to gamble or win in a game and she demonstrates that in the best way she can show to his mother: with mahjong. Rachel eventually comes to terms with the fact that her love and happiness is an American-made concept to Nick’s strictly Chinese parents. And that happiness comes with a cost. A zero-sum game, as Rachel would say. Rachel, loving, kind, compassionate woman that she is, makes her own choices and accepts the consequences. 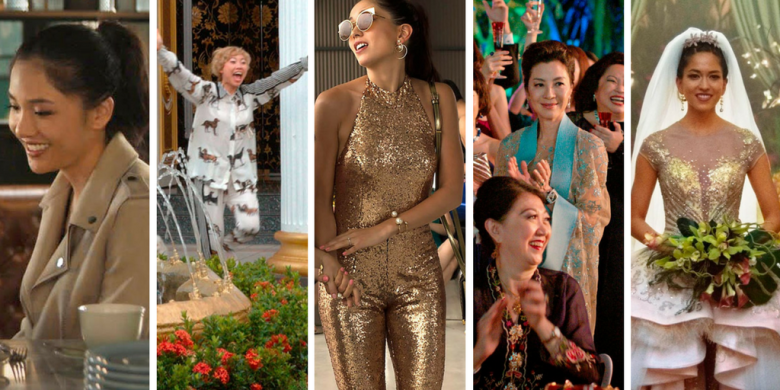 I would 150% recommend this movie. For the lovers and romantics, for the Asians longing for any sort of representation (don’t worry, they did an amazing job), for the old soul looking for a reason to smile, this movie is for you. Definitely a romantic comedy at its core, it had me laughing and in stitches for good chunks of the movie; you can’t help but fall in love with Rachel and Nick’s love. But drama. Hoo boy is there drama. It is exactly the wealthy-heir-marrying-commoner situation that has tickled our interests since the era of Jane Austen, but it is more than that. 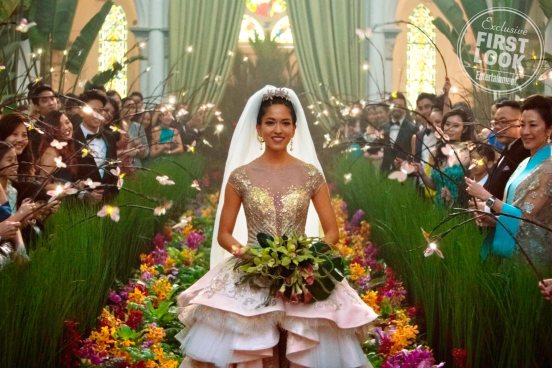 It is cultural. It isn’t just a social status or a preservation of the elites for Nick Young’s family, it is how they have maintained such a flourishing business. It is a sacrifice of the individual for the well-being of the community. It is about putting what is better for others before yourself, and this is a concept explored and criticized by Nick’s elders in the family. Which is controversial as a majority of the audience grew up on American values of rags-to-riches and hard work equalling success…so much so that his elders’ conservative views on what it means to be a family is negatively affecting their children’s lives.

It is such a pleasure to see Asian representation rocking the screen and making this summer a summer to remember. Crazy. Rich. Asians. A perfect blend of love and family and what it means to exist in-between worlds. It tackles so much, had so much expectation riding on it, and it delivered in the best way possible.

Did I also mention it had an all-star cast of ALL Asians? No? Well, there’s that. Each performance is so amazingly portrayed, it makes me wonder why anybody ever thought Mr. Yunioshi couldn’t be played by an actual Asian. Food for thought.

Sincerely, 60% of the world’s population.

Shay Santos | Writing Contributor & Filmmaker
B.A. | Film & Comparative Literature | San Diego State Univ.
Strangely obsessed with rule-of-thirds, color theory, and lightbulbs, Shay should not be left alone with a camera for any extended period of time. She loves telling stories, be it on page or on screen and at the discretion of her two friends. Her one rule for filmmaking is that every shot should be aesthetic. Her second rule is that you don’t have to follow the rules. And the third unspoken rule (punishable by excommunication from the boba squad) is that it absolutely MUST tell a story nix sound, dialogue, and SFX. Catch Shay chilling in the manga section of Barnes & Noble or jamming out to anime OSTs. Instagram @zafra.photography | View My Blogs