In a world where children’s toys are alive and move about when no human is present, a toy named Woody finds himself in the apple of his owner Andy’s eye until Andy receives another toy, Buzz Lightyear, on his birthday and puts Woody second. Woody then goes to extreme measures to make sure he becomes Andy’s number one again.

The movie opens with a young boy Andy playing with his toys and imagination. Already within the first 10 minutes, it is notable that Woody is Andy’s favorite toy with the décor in his bedroom and house and the way Andy treats him, a little different than with the rest of his toys. After the opening montage, it is established that the toys can talk and move about when humans are not around & that Woody is an arrogant, selfish leader with other toys like Hamm and Mr. Potato Head jealous of his place in Andy’s heart. When Woody announces that Andy’s birthday party is today, the others panic with the thought that they might get replaced. Woody, confident that it will never happen to him, tries to comfort the gang. The tables turn on him when Andy receives the hottest, new toy Buzz Lightyear and replaces Woody as his favorite toy; thus, making Woody jealous of Buzz.

One day, Andy’s mom plans a night out with Andy and his sister Molly, but Andy is allowed to take just one toy. Woody, worried that Andy will take Buzz and not him, tries to get Buzz out of the picture so he can be Andy’s favorite toy again. Plotting to push Buzz behind the drawer, Woody ends up pushing him out of the window. The other toys witness and are appalled by Woody’s impulsive gesture, so they throw him out the window as well. Woody and Buzz catch Andy’s family van before it leaves the driveway, then they find themselves lost at a gas station. With Woody desiring to go back home, he must bring angry Buzz with him home for the other toys’ approval and find a way to be Andy’s favorite toy again. Matters get worse when the two toys are by themselves at a pizzeria arcade filled with kids who are playful and harmful.

This movie does a fantastic job with establishing a world, the protagonist & his goals. We see Woody as a big-headed leader is the favorite toy and always seen as the hero to his owner’s eyes. The movie challenges Woody by introduces the antagonist Buzz Lightyear to throw Woody out of his comfort zone, which then influences Woody to make an impulsive gesture that gets him in deeper trouble. The writers did well with the story’s structure by closing plot holes and create points of no return for the characters. Their job with character development is subtly worked in there with Woody learning that some jobs, like escaping a torturous kid Sid & giving a child joy, are meant for more than one toy. The final act of the movie is outstanding by taking ordinary (and unordinary) toys and their functions to help Woody and Buzz escape from Sid’s house and find their way back to Andy. The story does a great job tying all of the plots in the end with no further questions to ask. Little did we know, at the time, that a sequel to this amazing movie, was on its way. 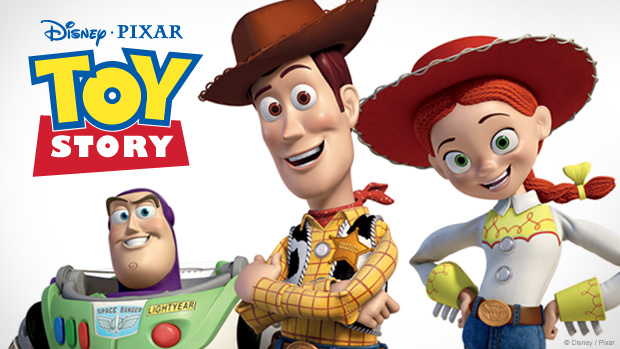 Starring: The Voices of Tom Hanks and Tim Allen