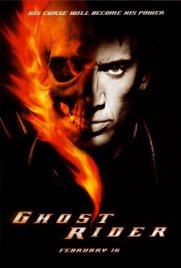 Johnny Blaze (Nicolas Cage) and his father are motorcyclists, and when Blaze learns of his father’s terminal cancer, he accepts Mephistopheles’ (Peter Fonda) proposal to sell his soul in exchange for his father’s health. But Mephistopheles deceives him, as Blaze’s father dies in a motorcycle accident the following day causing Blaze to abandon his hometown and his love Roxanne (Eva Mendes). Twenty-one years later, Blaze is a famous motorcyclist known for “cheating death” with his wildly dangerous motorcycle jumps. Just as Blaze prepares for a reunion dinner date with Roxanne, who is now a successful news reporter, Mephistopheles’ son Blackheart (Wes Bentley) comes to Earth determined to summon Hell onto its people by retrieving the contract containing a thousand evil souls. Mephistopheles consequently summons Blaze, telling him that he is the ghost rider (a flaming skeleton on a motorcycle) and offering to return his soul if he can defeat Blackheart. Through the wisdom of a cemetery caretaker (Sam Elliott), Blaze learns to control his powers as ghost rider and challenge Blackheart and his minions. But Blackheart soon discovers Blaze’s love for Roxanne and captures her, demanding the contract in exchange for her life. After being told of Blaze’s predicament, the caretaker reveals himself as the former ghost rider and gives Blaze the contract he had been hiding. In a final showdown, Blaze delivers the contract to Blackheart but afterwards defeats him with Roxanne’s help. When Mephistopheles offers Blaze his soul back, Blaze refuses, saying that bringing justice as the ghost rider is what he was born to do.

Watching Ghost Rider is like being an eleven year old on Christmas morning in Beverly Hills; there’s just so much to unpack you have no idea where to start. Do I go to the stocking or straight to the small rectangular box which I can assume is the newest iPhone? Should I pay attention to the constant voice distortions or the fact that Eva Mendes is head-over-heels in love with Nicolas Cage? A jelly bean-loving stuntman who turns into a flaming skeleton that rides a motorcycle and fights demons. You couldn’t dream of a role more perfect for Nick Cage.

You won’t leave Ghost Rider excited about impressive acting or a badass action sequence, but more in a silent awe at what you just witnessed. You certainly won’t leave unsatisfied, as the movie exceeds its due of maniacal laughs and overdrawn threatening finger points. Some scenes will leave you speechless from either laughter or outright confusion, such as the scene in which Blaze doesn’t want to be distracted from his engaged viewing of monkeys doing karate, or when Roxanne, Eva Mendes, feels the need to ask her waiter if he thinks she’s pretty just to have him say “eh,” and walk away. The villains are largely disappointing, with Blackheart’s three demonic minions dying all-too easily in three separate, short action sequences that all seem to end with a drawn out “Noooooo!” Blaze’s defeat of Blackheart also seems too easy. We never get to see Blackheart truly take advantage of the powers he received from the contract of a thousand evil souls, but instead Blaze kills him with his Penance Stare almost immediately. Additionally, Roxanne’s love for Blaze seems largely exaggerated. Granted, it’s an action movie, but even within the expectations of the genre she seems far too head-over-heels for a guy she loved when she was a teenager and who stood her up when they finally decided to reunite.

Whether or not Johnson intended, the cliches are actually what make this movie so entertaining. As an action film, Ghost Rider is underwhelming. But while it falls short in action, so many aspects of this movie are just inherently fun. If you don’t love one-liners like “time to clear the air,” and cheesy puns like “morning, bonehead,” then why did you choose to sit down and watch a movie with Nicolas Cage as a flaming skeleton motorcyclist in the first place? 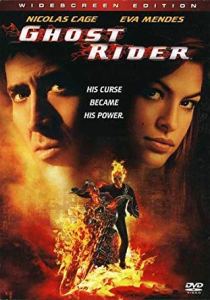