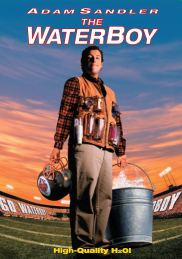 Bobby Boucher Jr. (Adam Sandler) takes his waterboy job for the national champion football team very seriously. Passive and downright strange, Boucher gets constantly harassed on the sideline by the team’s players and is eventually fired by head coach Red Beaulieu (Jerry Reed) for being too much of a distraction. He decides to join as waterboy for the worst team in college football, where Coach Klein (Henry Winkler) advises him to stand up for himself. Attempting to do so by channeling his inner rage, Boucher tackles the quarterback during practice, impressing a desperate Coach Klein and earning himself the spot of starting linebacker. Against his overbearing mother’s (Kathy Bates) best wishes and despite barely knowing the rules of the game at all, Boucher exploits his anger to become the best linebacker in college football, almost single-handedly bringing his team to the Bourbon Bowl where he faces the former national champions whom he once served water. Once an assistant coach with Beaulieu, Coach Klein also has a history with the national champions, being too intimidated to call new plays after Beaulieu stole his prized playbook and fired him. To make matters worse, Boucher’s “Mama” learns that he is a football star, and pretends to fall into a coma to stop him from playing. Yet eventually Boucher and his supporters convince Mama to let him play again and Coach Klein overcomes his fear of Beaulieu so they can lead their once winless team to victory in the championship game.

A lighthearted comedy that doesn’t take itself too seriously, The Waterboy is hilariously strange: one of those movies you’ll take pride in consistently quoting. With an underbite, stutter, and a burning passion for serving water, Adam Sandler leads a hilarious cast in this movie about a mother-loving waterboy turned football star. Aspects of the plotline like Coach Klein’s fear of Beaulieu and Boucher’s crush Vicki Vallencourt (Fairuza Balk) are unconvincing, but as a goofy comedy driven by oddball characters and individual jokes, these specific shortcomings don’t lessen the movie’s entertaining appeal. Besides, the storyline as a whole is hysterical: a waterboy becomes a football star by channeling his inner anger through mentally swapping the faces of the opposing players with the faces of people who pick on him.

The Waterboy’s acting is perfectly over-the-top. Kathy Bates and Henry Winkler could be playing Girl #1 and Guy #4 and they would still manage to make the audience laugh every time they touched the screen. Moreover, who doesn’t love a random Rob Schneider cameo? Critics, maybe, but either way, Schneider’s “You can do it!” line is arguably the most quotable from the entire film. Still, the majority of the film’s hilarity relies on Sandler’s enigma of a character, who refers to himself as a “water distribution engineer” and tackles his Colonel Sanders-look-a-like of a professor after hearing that alligators are not aggressive because “they got all them teeth and no toothbrush.”

I found myself wanting to see more of Boucher’s bizarrely simple personality and style of play in the scene of the championship game. Specifically, the moment when Boucher heals his injury by drinking his flask of mystical, permanently cold Alaskan water is cut disappointedly short. Despite the somewhat disappointing final game conclusion, The Waterboy is a perfect late night comedy, generating a laugh in every scene with jokes ranging from alligators to butt tattoos of Roy Orbison.