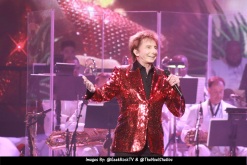 Its being to look a lot like a ‘Very Barry Manilow Christmas‘ with a little taste of Vegas too. The iconic singer and songwriter Barry Manilow kicked off his holiday concert in early December just to give us a sneak peak on what to expect at his 2019 Vegas residency tour. What a way to get into the Christmas spirit with a concert packed with Holiday classics, Manilow Hits, Santa, kids, snow and more! Barry still has it and is an outstanding stage performer. And, I encourage you to check out this wonderful show with your family and friends this holiday season as well. 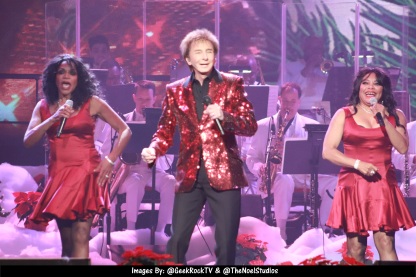 Barry Manilow got his foot in the door of the pop music world while working as part of a duo with the then-unknown Bette Midler. With many hit songs, including “I Write the Songs,” “Looks Like We Made It,” “Could It Be Magic” and “Copacabana (At the Copa),” followed, as did Grammy and Tony wins for a Broadway performance.

As testament to his musical significance, Manilow was inducted into the Songwriters Hall of Fame in June 2002, alongside Sting and Michael Jackson. | * Source Biography.com

Throughout her career, Machelle has interviewed many of Hollywood’s finest actors and musicians including Luke Perry (90210), Zachary Levi (Chuck & Shazam), Roma Downey (Touched By An Angel), Jason D. Frank (Power Rangers), Marc McClure (Superman – Jimmy Olsen) and many other stars from Warner Bros TV and Animation. Her interviews primarily focuses on promoting positive and inspirational messages to the viewers. Machelle is an advocate for mental health awareness and spiritual wellness as well.