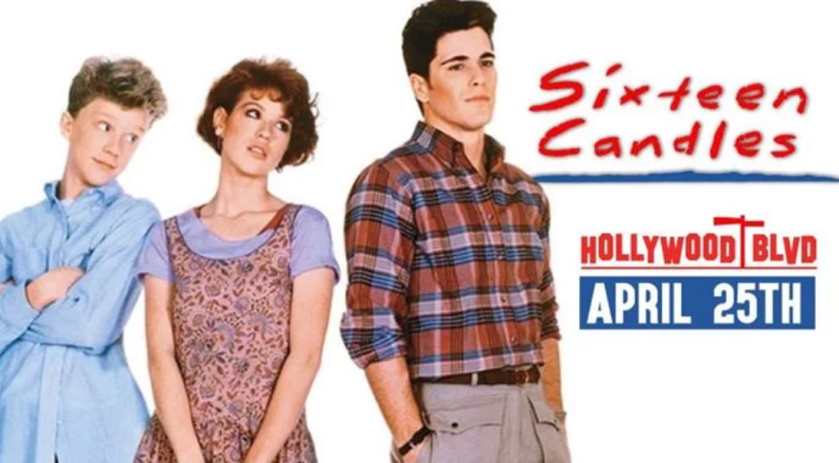 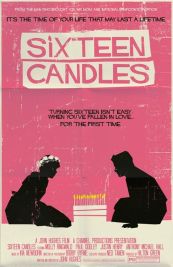 Sixteen Candles, a coming of age masterpiece written and directed by John Hughes, takes audiences for spin into the tumultuous teenage life of Samantha Baker (Molly Ringwald) a high school sophomore. Sam and her family are focusing all their attention on the preparation for her sister’s wedding the following day. Meanwhile, Sam’s 16th birthday is completely forgotten by every one of her family members. Her overlooked birthday is just one of the problems Sam faces, the other being her suffering from a crush on the school’s senior heart throb Jake Ryan who she doubts she could have a chance with.

As the opening credits begin to roll, a typical morning at a high school unfolds. Hughes’s choice of camera angles focus in on the different footwear students are wearing. One shot frames a girl glossing her lips with pink lipstick, another just of the back of a few girls’ heads all combing their various teased hairstyles in the locker room. Right of the bat, the classic nostalgia and rock music beat in the background wisp audiences back into the 1980s. The movie begins with Sam in her frilly, pink bedroom scrutinizing herself in the mirror on the morning of her 16th birthday. She expected to wake up feeling and more importantly looking like a new and improved woman. However, she is utterly disappointed in seeing the same version of herself she did the night before. Rushing down stairs after getting ready for school, her whole family is so caught up in plans for the wedding the next day, no one gives Sam the slightest birthday recognition and she is left dumbfounded on the stairs. Once at school, a new crisis presents itself. Sam confides in her best friend that she passed a note with her crush’s name on it in their independent study class earlier that day, but her friend explains she never received the note. Here is where Sam’s crush Jake Ryan (Michael Schoeffling) is revealed in addition to her major worry that he will find out she likes him. Sam’s friend assures her Jake Ryan, a popular senior and jock, is surely unattainable. As the school day comes to a close, Sam and her friend tread onto the dreaded bus. Jam packed on the bus are a variety of stereotypes typically associated with high school. Nerds, musicians in marching band, and loud freshman all paired with an odd bus driver depict a scene all too familiar to anyone whoever rode the bus in their school days. Hughes succeeds in his film by creating a story with relatable aspects of feelings and situations associated with any generation. Most know all too well the horrors of a crowded, confined bus ride from school or the hopeless dreamy fantasy of crushing on an upperclassman. Hughes is clever in incorporating two stories of infatuation of one whose older. Ted, a witty yet geeky freshman (Anthony Michael Hall) relentlessly tries to woo Sam after spotting her on the bus ride home. Unlike Sam admiring Jake from afar, Ted has no hesitations in letting her know that he is absolutely interested. Although, irritated at his first attempts of personal matchmaking, Ted moves into a soft spot of Sam’s heart. Later that same day, Sam sprints out of the school dance after Jake catches her gazing intently at him as he shares a slow dance with his girlfriend. Ted finds her and listens about her disappointing birthday and apprehensions about pursuing Jake. To both Sam and Jake’s luck, Ted befriends the two and is the source of encouragement both need to start making progress towards actually working up the courage to speak to one another.

While Jake’s inconsiderate and wild girlfriend threw a party at his parent’s home, Jake dismisses the party and stays in his room deciding to take the chance to call Sam. To his dismay, Sam’s grandparents are the voices who Jake hears on the other end of the phone line and refuse to give Sam the message from a hooligan calling late at night, only prolonging their first interaction. Hughes implements humor like the mishap of the call most likely to prove that love is a funny, odd phenomenon which does not nearly go as planned as many other romantic movies paint it to be. Even minor characters such as Long Duk Dong, a Chinese foreign exchange hosted by Sam’s grandparents, is a significant beacon of the film. Although only in the United States for a few weeks, he wastes no time finding himself in the steady arms of one of the school’s athletes and partying the night away with her. Long Duk Dong’s quick found romance just adds to Sam’s disbelief on the difficulties of finding love in a town she grew up in her whole life.

The film begins to descent into the resolution after Sam returns from the dance and is laying on her couch in the living room. Her father comes in sincerely apologizes for forgetting her birthday and attempts to understand what else is distressing Sam. She confesses her feelings about Jake and how her pursuit of Jake is hopeless. The scene is a heartwarming father and daughter moment as he reassures Sam of her unique character, something anyone would be lucky to get to know. John Hughes hits the mark with Sixteen Candles creating a film which has stood the test of time, still watched over thirty years later. Although the film does implement stereotypes of certain cliques, it does not do so in a malicious way but rather in the pursuit of humor. The film’s success relates to personal connection it conjures up in audiences. Even if one did not heavily suffer from the stress of romance in high school or the disappointment of their birthday slipping the minds of everyone in their family, all can relate to the pressures of fitting in, desiring to look older than you are, and the stresses associated with a misunderstanding family. 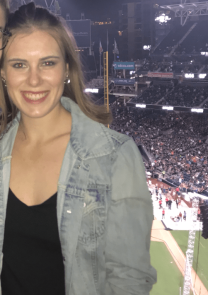 Cathleen Meyer | Writing Contributor
B.A. | Communications | Cal State Univ – San Marcos
Cathleen is a college student who places an importance on being active and is an old soul at heart. Her music taste is a jumble of different artists with favorites like ABBA, Def Leppard, Journey, and Fleetwood Mac. When it comes to movies, musicals and 80s are her first choice. Cathleen wrote for her school newspaper for two years in high school and since then has participated in a government and human resources internship. She enjoys delving into a good book whenever possible, with time period pieces being her favorite type of literature to explore. Being a Disney fan since birth, her favorite time is spent with her family at the happiest place on Earth. A personal hobby of Cathleen’s since she was young, is hairstyling and makeup. Once she completes college, she plans to attend Paul Mitchell Beauty School to follow her passion. Cathleen hopes to apply her communication and literature degree to a variety of career paths most importantly including public relations. | Instagram @Cat17Cat| View My Articles