It’s a Bird… It’s a Plane… No wait… Its Gotham’s Joker playing Superboy!! Cameron Riley Monaghan is a professional American actor and model. Cameron is best known for his role as Ian Gallagher on the Showtime comedy drama series Shameless and Jerome / Jeremiah Valeska in the Fox crime series Gotham. We recently caught (if not by surprise) up with Cameron at the Paley Center in Beverly Hills promoting his latest project – Reign of The Supermen for the LA Premiere. 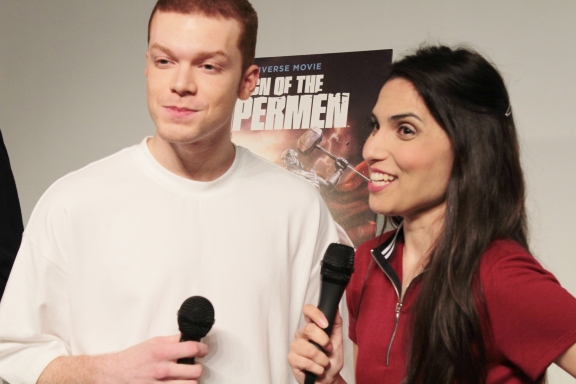 We got to pick his brain more about his personal take on his role in the movie and how his experience went during the filming process. It is clear through the interview that Cameron had a clear vision on how he should bring energy and life to his portrayal of Superboy. Something that a lot of fans, including our very own host, are ecstatic to find out.

Host: Machelle Noel here from GeekRockTV over at the Paley Center in Beverly Hills for the Reign of Supermen. Joining me right now is Cameron Monaghan who’s playing Superboy! You have no idea how excited I am seeing today, cause I didn’t know you were going to be here and you just kinda showed up out of nowhere!

Cameron Monaghan: I do that. I sneak up on people.

Host: I don’t even know where to begin! I mean, it’s Joker from Gotham, Superboy from Superman! So how has the transition been like playing the villain Jerome over at Gotham to now the good guy Superboy?

Cameron Monaghan: You know, it’s an easier transition than what you would think. I think that with all these characters they’re kind of charismatic and a little bit of showman and you’ll see that with Superboy. He was raised by Lex Luthor and even though he’s trying to be Superman, he’s a little bit arrogant and a little bit pompous and he just has an easy up. He’s just a very young guy, so he’s bringing that energy which I think is always something fun and there was a lot to play with the character.

Cameron Monaghan:The world would have a lot more attitude in it! –

Cameron Monaghan:And a lot more 90’s references because Superboy was raised on 90’s sitcoms so..

Host: Speaking of sitcoms, did you every YouTube or grow up watching the adventure of Superboy starring John Haymes Newton and Gerard Christopher?

Host: I used to grow up watching that show and that’s where it all kind of began. I was like “Oh my god this is like serious guilty pleasure!”

Cameron Monaghan: Right! Nothing guilty about that!

Host: So what can you tell us about Superboy in this particular film?

Cameron Monaghan: Superboy is the clone of Kal-El and he was raised by Lex Luthor so he’s grown up in isolation and he’s trying to interact with people but he’s not always doing a great job. He wants to be seen as a hero, and he wants to be recognized for it and he’s trying a little bit too hard to do that. So he means well but his methods are probably not the best.

Host: What are some of your memorable playing this character?

Host: Art imitates life for you, so what other kind of characters would you love to voice in the DC world?

Host: *gestures mic towards Cameron* Here’s the baton, there you go.

Cameron Monaghan:You know what, I didn’t even say that!

Host: Okay, it’s up in the air! Now if Superman existed today given the climate that were in, do you think we would be as welcoming versus where he was at in the 80’s and 90’s?

Cameron Monaghan: I think yeah, I think so.

Host: Cool! Good answer! It’s the right answer! Well folks, thank you so much Cameron for joining us be sure to catch the Reign of the Supermen that’s hitting theaters this weekend this month and Cameron thank you so much and we look forward to also seeing you final season of Gotham!

Host: Thank you so much for joining us and cheers to your success!