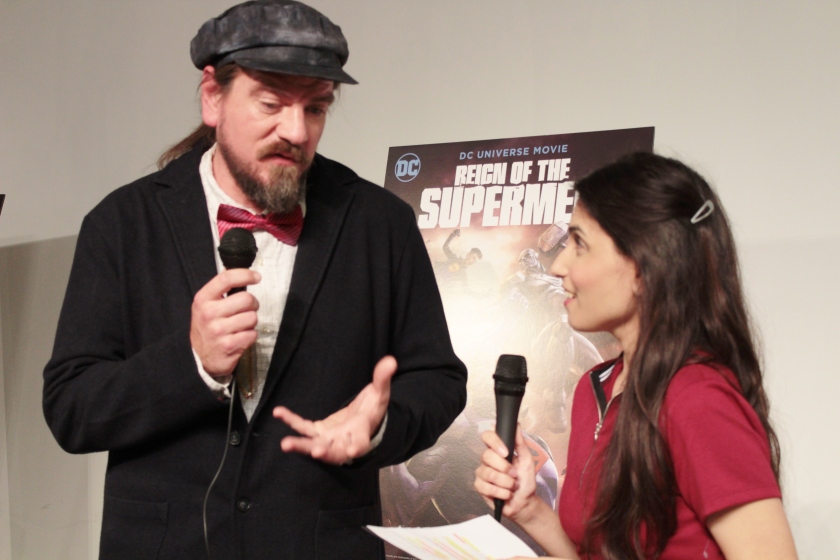 Charles Halford is plays the roles of Bibbo Bibbowski and The Eradicator in the film Reign of the Supermen. During the interview Charles tells us about the roles of his characters and what he personally thinks about the characters. The love and excitement that Charles has for these characters becomes evident when he gets asked about his thoughts about these characters. In addition, he shows just how honored he is in playing a character that has never really been seen on screen. As Charles talks, you could really see just how much fun he has had in playing the roles. In addition, he has an easy feel about him that comes off as the kind of man you would want as a neighbor. The kind of man that of man that comes across as a real life Bibbo Bibbowski. More known for his roles of Reggie Ledoux, a serial killer in the first season of True Detective, and Francis “Chas” Chandler on the NBC series Constantine. Let’s hope that he’s not secretly more like The Eradicator.

Host: Hi everyone, Machelle Noel here from GeekRockTV at the Paley Center in Beverly Hills talking to the cast of Reign of Supermen.

Host: Machelle Noel from GeekRockTV over at the Paley Center in Beverly Hills, joining me right now is Charles Halford, who’s playing, let me see if I get this right, Bibbo Bibbowski and The Eradicator.

Charles: You did that better than my mother did that.

Host: I was practicing all weekend long. First it was like, ‘The title. I cannot screw up the title.’ But yes. Reign of the Supermen. And these are exciting characters, because we’ve never really came across the Eradicator on screen, so that’s exciting to be a part of.

Charles: No, that’s a huge honor. You know, in a way I hadn’t really realized that, because you know there’s so many iterations, these days, of these comic characters that I hadn’t realized that, like, I’m actually breaking the ice with the Eradicator. And that’s effing awesome.

Charles: And Bibbo is just a great gift as well. I mean that’s a character when I was a kid that I totally related to…to that guy; and just had his voice in my head throughout. So when it came down the pipe I was like, ‘yeah, I’ve got an idea.’ And fortunately, it worked out.

Host: Well, how did you decide the voices between those two? Because I’m sure that was pretty challenging to come…to break it down to.

Charles: You know…well I appreciate you mentioning that. I…It was really more intuitive than anything. I had a feeling for Bibbo; just kind of heart feeling. And then the Eradicator, the feeling was kind of like a coldness or just a detachment, and then I just sort of just jumped in with that. And we had a great director, voice director in Wes Gleason and direction with Sam and everybody. Other great actors to play off of. So, yeah the rest of it was just good luck I guess.

Host: Who was actually more fun to play? Bibbo or the Eradicator?

Charles: Oh what are you doing?

Host: I know, I know, these tough questions. It’s like picking your babies. Like which child do I want to go with?

Charles: That’s so tough. The toughest. I can’t. I know, I can’t. I mean I don’t even have babies. Yeah, I love them both so much for…like…just…It’s just so much fun. I mean, the Eradicator is a badass who’s just like Superman. I mean come on. He’s Superman. That’s like a real Superman.

Charles: And then, Bibbo is just…he just this lovable oaf that is…yeah, I just want to hang out with him. So I just kind of jumped in and started swimming and had some good direction and just happy to be here.

Host: What were some of the most memorable moments between the two characters that you enjoyed a lot compared to your other fun projects?

Charles: Oh man…well again this is such an iconic storyline. And I’m of the era, so when I was growing up, at 12-13 years old, the death of Superman was in all the news. It’s not like it is today with the comic books. This was a big deal.

Charles: And Reign of the Supermen to follow up with that, so…just yeah…just kind of seeing it come to life and then, like seeing the way they’ve bridged the worlds has been just fascinating. So, I think if there’s anything, a favorite part of this that sets apart from other work that I’ve done, It’s just watching this universe and these brilliant creative people…you know…come together to merry all of these different kinds of worlds. And the easter eggs and all these things. It’s so rich. It’s so awesome. That’s…so it’s just awesome.

Host: Well, if Superman existed today, given the climate condition that we’re in in 2019, do you think it would be as welcoming versus where he was at in the 80s and 90s?

Charles: I think we could use a Superman. You know, I think we could use somebody who…who was always…who was always fighting for what is right. And always for the betterment of humanity. And will stop to save a child. As opposed to, perhaps, you know…not doing that. So yeah, I think that Superman is never going to get old. There’s always going to be a time and a place for Superman.

Host: Good answer. Well my dear, thank you so much for joining us and we wish you continued success. Be sure to catch Reign of the Supermen hitting in theaters this week or this month. And hopefully we’ll see you again soon. Thank you so much, this was a wonderful interview. Cheers to you. 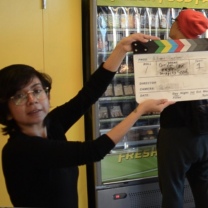