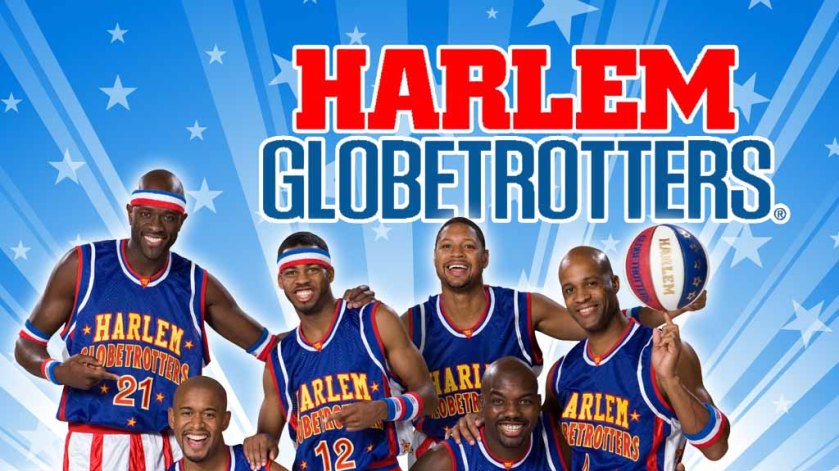 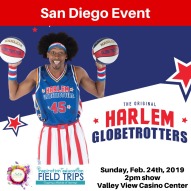 The Harlem Globetrotters. When I was kid, this group of showy, witty, and goofy basketball players inspired me play basketball every day with my friends for about a week. Then I moved on to other things. But, that doesn’t change the fact that I have always liked the Globetrotters since I was a kid. Even more so when I saw them guest star on an episode of Scooby Doo in the mid-90s. The biggest problem I had at the time was that I only ever saw them on TV once every other year or so. This was also a time before DVR or T-Vo was a thing. And now, twenty something years later I finally got the chance to see them at the Pechanga Arena in San Diego. And I am happy to say that I was not disappointed.

Before the game even came close to starting there were some fun performances and audience games that took place. I admit that I was a little confused at first when I walked into the arena and there was a Zoomba class taking place on the court. But, once the DJ, DJ Def, announced Globie, the mascot of the Harlem Globetrotters, I started to feel a bit better. I was not prepared in any way to do any kind of exercising, so I got nervous. 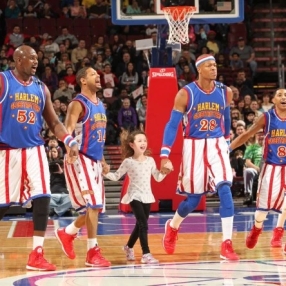 Once Globie entered the court, there was some mascot fun as he somewhat kind of danced with three random audience members to various songs including the famous Spice Girls song Wannabe and played musical chairs with some participating kids. Globie pulled a couple of tricks and silly cheats while playing the game, but it was all in good fun. At least to him. One of the kids playing musical chairs was a little girl and she was very serious about winning that game. Toward the end of the game, it came down to her and Globie. And she stared Globie down like a predator. It was intense. But in a fun way. However, as soon as the music stopped she managed to get to the seat first.

As soon as the games were finished the teams were then brought onto the court. Introduced first was the Washington Generals. As they ran around the court in that basketball team preparing to play some basketball kind of way their MVP, Cager, was announced. As soon as he came out he started insulting San Diego and flattened a basketball with his hands. Because, you know, it’s what you have to do after insulting a place. That how you know someone is serious. By smashing a basketball. 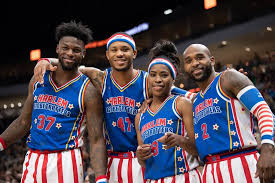 Next were the Harlem Globetrotters. As they came out onto the court they were announced individually except for one guy, Dizzy English, which proceed to throw a sort of mini tantrum. As some of his teammates tried to cheer him up and convince him back onto the court, he began to sit with an audience member and admire the guy’s bald head. Afterwards, he rejoined his team and they proceeded to do tricks with the basketball in a circle. There were twirls, tosses, spins, and dances. The tricks were pretty impressive. At some point, they even pulled off over half court shots.

After the national anthem, the game ensued and the Globetrotters immediately began to commit random shenanigans. Confusing the referee by passing him the ball, randomly bringing kids into the game to shoot the ball, and tricking the other team by passing them the ball just as a player is about to go out of bounds. At one point, the Globetrotters called a time out to allow Big G, the mascot’s older brother, to come onto the court to perform some funny dancing. Such dancing consisted of shaking in strange inflated motion, deflating and inflating, along with some old dances from the 90s. Afterwards, they brought a bunch of kids to try and steal the ball away from one of the players and a random guy from the audience so that he could play. 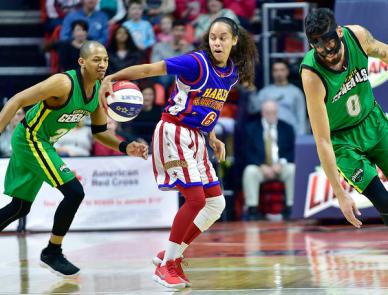 Once all was said and done, it was time for the half time show. The half time show consisted of some kids doing double dutch, which for those that don’t know is when two long jump ropes are held in opposite directions and one or more people jump in the middle. However, this wasn’t regular double dutch. This was advanced double dutch. While jump roping, they were doing flips, twists, and dances. At one point they started intersecting and crossing the jump ropes to which more flips happened. It was quite impressive. Especially this small 5 year old girl that was practically a jump rope ninja.

After the half time show, more shenanigans ensued as the audience played with giant beach balls during another mini game, Money Merriweather climbed on top of the hoop to block the ball and proceeded to dance which led to him getting a stuck in the hoop, and stopping the game for a bit for the YMCA. Because, why not? At some point, someone was wearing a Black Panther mask and crawling along the floor. Ant Atkinson, probably the wittiest and funniest guy on the team, made an incredible over half court trick shot.

By the end of the show, Cager began tearing apart Globetrotter stuff and reset the scores. At that point Ant suggested that the first team to six points wins. It got really close as the ball shifted quite a bit from team to team at this point, however the Globetrotters barely managed to snatch the ball and make the winning shot.

Eddieson Burkhalter | Writing Contributor
B.A | Japanese | San Diego State Univ.
My name is Eddieson. I’m an open minded dreamer that likes to look for new opportunities, experiences, and challenges in life to make things a bit more interesting. After graduating from San Diego State University with a Japanese degree and minor in Business,  I landed an office job in Shinjuku, Japan where I dealt with online marketing matters as well as content creation. Though I come from an international business background I could never escape the alluring call of an emotionally manipulating story, regardless of the medium, that could turn the toughest body builder into a two year old child watching The Muppets and eating “pig newtons”. So long as the story is well done it doesn’t matter to me whether it’s presented as a comic, video game, anime, book, movie, or even an interpretive dance with bananas and jello. After some intense independent study I have not only been more than inspired to join the industry, but brought to a point where I wonder why I gave up pursuing this stuff in college and turned to a course of pulling my hair out before each exam. Regardless, I love stories and hope to be presented with the opportunity to tell my own; most likely through writing. With a fire in my heart and goals set I am actively gaining skills each day to hopefully one day help others in their endeavors as well as achieve my own dreams. |Instagram @BlaEddieBla| View My Blogs