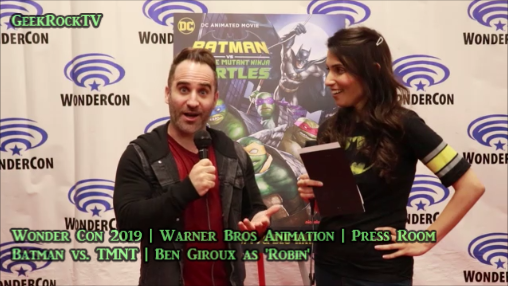 Host: Machelle Noel here over at Geek Rock TV over at WonderCon 2019! Joining me right now is Ben who is playing Robin, over at Batman vs. Teenage Mutant Ninja Turtles. Holy Cowabunga Ben! How are you?

Ben: I am doing good! It is so nice to finally be able to show people this movie.

Host: So awesome I can tell. So what can you tell us and how does Robin actually fit into this storyline?

Ben: Well here’s what’s interesting, I think that the best part of this movie is that you’ve got iconic characters from two really storied franchises coming together in one giant crossover. Uh I think that our writers have done an incredible job of being able to weave all those different together in a singular narrative. Uh – but yeah Robin, I am actually playing the 10 year old son of Batman, so I am the Damian Wayne version of Robin. Uh – and so he just – he’s this like prepubescent vigilante that just wants to be Batman and prove himself. Uh- and I think at first he’s sort of skeptical of the turtles and then starts to embrace them as the movie goes on.

Host: Now what went through your mind as you got casted as playing Robin?

Ben: Well gosh you know it’s an iconic role so I was ultimately feeling a lot of responsibility to the comic book community to be able to do a great job. Uh – I think personally, my parents own a comic book store in Phoenix Arizona called ‘All About Books and Comics’ so I grew up around comic books and uh – I just felt like a very full circle role for me to be able to get to play such a – such a well known character in the comic book world.

Host: Okay and what can you tell us about your inspiration of how you were going about this character?

Ben: Yeah so you know it’s interesting, you’ve got to obviously play it young so you know your voice is gonna kind of go up here a little bit, but you’ve also got to have like some gravitas to it because he’s a little – he’s like a little jerk half the time you know? So I think what’s super fun about this role is that it’s you know it’s a badass comic book role, but he’s also funny and so – and they’ve done a great job of casting uh – funny people in these roles as well. My buddy Kyle Mooney from college uhhh Eric Foust is in it so we’ve got a bunch of funny people in it and I think the comedy definetly comes out uh – with this film.

Host: For sure – and what can you tell us about the overall theme, like what do you tell the audience out there?

Ben: I mean ultimately have fun watching this because this movie presupposes that you know all of these iconic characters, which you do, and it’s cool to see Batman battling Shredder. Uh – it’s awesome to see you know Ninja Turtles with Robin and Poison Ivy and Bane uh – it’s – it’s – weird and awesome and the whole thing is just one giant incredible fight scene.

Host: Very awesome – and we also have some fun questions. Now we heard that Batman is celebrating his 80th anniversary –

Host: It’s his birthday and we’ve been invited to the Wayne mannor, how are planning to celebrate- how are you planning to toast to him?

Ben: I would toast him by buying 10 giant Dominos pizzas because the turtles did in fact make Robin a pizza fan in this movie.

Ben: Gosh you know what I’m a pretty basic like sausage pepperoni guy when it comes to pizza but umm yeah I like pizza and I like a lot of it.

Ben: Oh man – that’s like – it’s like if you’re a parent choosing between your children. Uhh – I don’t know I kind of like Raphael sort of like the you know one of the leaders of the bunch I would say. Like he has uh – you know typically has a plan.

Host: Alright and if a theatrical adaptation was in the works, what would be on your list, what would you like to see?

Ben: Oh gosh. It’s so interesting because I think in this movie it accomplishes a lot. There’s like ten different fights uh – but look I think that this – I think the turtles and Batman are such storied characters and characters that you root for it’s fun to see them team up, so I just think further adventures of them teaming up uh – you know we get a little bit of penguin in this movie, but I think we can get a little bit more. Um we have obviously some Joker, Troy Baker does an amazing job at voicing both the role of Batman and Joker. Uh – but you know you could sort of spin this whole ting off and just focus on one villain, rather than all of them and do a ton of movies.

Host: You seem to have such a great love for the Turtles and if the Turtles had another chance to do a crossover, because they have already done Batman and Power Rangers, who do you want them to do a duet with next?

Ben: Oh man – okay here’s a weird one for you, Turtles Ghostbusters, think about it, kind of awesome right? Battling Shredder and ghosts? Slimer and Shredder in the same movie, I think that’d be kind of cool.

Host: So we have Fear of the Walking Dead we have Ghost Busters, the idea is just going crazy –

Ben: See I’m a 80s and 90s fan, I always go to the nostalgia and actually that’s what I really love about this project is the 2D animation is super 80s and 90s. It really harkens you back to childhood of watching the old school Batman cartoon.

Host: I cannot wait – we’re about to see this movie in about the next hour so Ben thank you so much again for joining us and folks be sure to catch Batman vs. Teenage Mutant Ninja Turtles coming to you on digital and on Blu-Ray. Ben thank you so much, we wish you the best in your future. 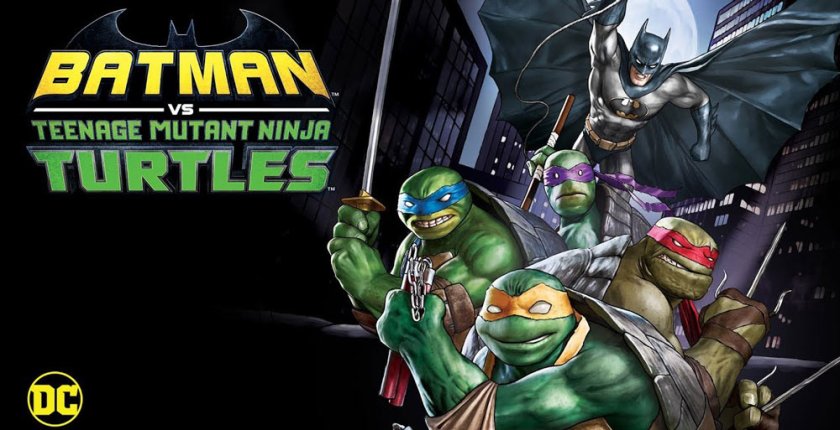