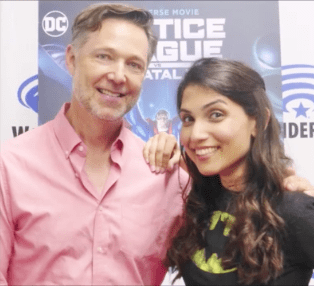 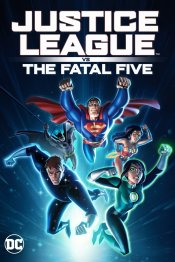 This year at the 2019 WonderCon GeekRockTV was able to steal an interview with successful actor, George Newbern. You may have seen him in action for Scandal, Father of the Bride parts one and two, and Justice League series. He was very happy to have been given the role of Superman once again and he had a lot of fun rejoining his fellow cast and crew members and battle the Fatal Five together. Unfortunately, he didn’t have much to share or any hints to give us regarding the film because he didn’t see the final product yet, but he did say that we get to see the gang battle some pretty intense new vilians. We also get to see Superman interract and possibly have an influence on the hero from the future, Starboy, which will be interesting to see. Now Justice League vs. The Fatal Five is available to own on digital March 30th and on Blu-Ray April 19th, so if you want to see your favorite heros battle some vilians from the future check it out!

Host: Michelle Noel here from Geek Rock TV over at WonderCon 2019 and joining me right now is the Man of Steel himself, George Newbern, he’s back in action playing Superman over at Justice League vs. The Fatal Five. Woah I think I did that in five seconds, how are you doing George?

George: You did, you had a lot of words! Good job.

Host: That was really good, thank you so much! Congraulations reprising this role again, it is wonderful seeing you. What was it like coming back and working with the gang again?

George:You know it’s just at thrill to get to work with Bruce Timm again and Kevin Conroy and Susan and it’s like Old Home Week you know?

George: Yeah we don’t get this sort – the whole Justice League thing just goes on and on and on and it has its own life and I don’t get to see them very often, so when we do it’s really special.

Host: Oh gosh I love that reuinion, that family reuinion – it was so long overdue I’m just telling you that right now. So what can you tell us about this particular movie? What can you share with us? Cause I did get a few spoilers eh you know that’s just me – I’m very good at that!

George: Well pretty much there are some badasses from the future that have come back to wreak havoc among the – the – the – triumvirate I guess and I’d say they handle – they get – they get business done and uh Superman gets hacked in the side –

George:– with a big sword where the technology doesn’t understand and I’m gonna talk about theater now. You know theater, when I was a young child and theater –

Host: Kevin is in the background teasing us –

George: – remember my first step was a little like this. Kevin!

Host: Hi Kevin! This is the third time he’s –

Host: This is the third time he’s photo bombed me.

George: Photo bombed – he’s always farting, when we were recording. It is aweful, I don’t – he needs to get to a doctor.

Host:There should be some kind of blooper reel for this –

Host:No no go ahead. Does he have any influence on Star Boy – like how does he play upon?

George: Um I’ll be honest with you I haven’t seen the finished product. So I generally uh….

Host: So how does Superman play an influence on Star Boy’s journey?

George: Wel I think they’re – they’re working together and they’re trying to defeat these – these bad asses from the future.

Host: Now let’s go back to Superman real quick, if he actually existed today – I mean of course he existed – but would he be as welcomed compared to how he was in the 80s and 90s? We live in a different time right now.

George:Now if he were to come back right now and just appear… I think he would – I think people are looking for someone that would be sort of a North Star – North Star sort of politically and socially that everyone could rally around.

Host: Interesting how people go in that direction, I always love asking this question my mind just goes ZIIIIP! Yeah if he actually had a billboard up somewhere on some freeway, what do you think his inspirational quote would be?

George: Oh wow what would his inspirational quote be? Umm – (laughs) There’s so much umm umm “Larry Parker got me 19.5 million dollars”.

Host: Okay okay I’ll take it. I’m not gonna argue with that – I like that. Now I don’t know if you’ve heard – Batman is celebrating his 80th birthday and we’ve been invited to the Wayne Manor. How are you planning to celebrate it and what would you actually toast to him?

George: I would come dressed as Batman, first of all –

Host: I think we all would –

George: – and then – and then I would toast him and rip off my uh costume and I would say “My mother could beat your mother in a throw down,” that’s it.

George: That’s what we would do.

Host: I think – golly I didn’t know you were – I knew you were funny but damn you’re really funny. George thank you so much for joining us. Folks be sure to catch The Fatal Five – Justice League vs. The Fatal Five coming to you on digital March 30th and Blu-Ray on April 16th. Hopefully I got the dates right if not I will probably go ahead and fix that. George thank you so much and congradulations! 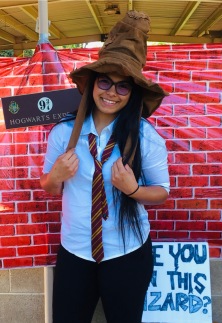 Krista Buligon | Marketing Intern
B.A. | Communications | San Diego Christian College
Hi! My name is Krista Buligon and I am a Senior at San Diego Christian College. I am a student athlete majoring in Communication with an emphasis in the Film and Media. I have always had a strong interest in all types of movies because they take me to another world. But my favorite places to go to are New York with a crazy spider kid saving the day, Gotham with a vigilante dressed as a bat fighting a penguin or joker, the wizarding world of Hogwarts with a kid with a scar on his head fighting “He Who Shall Be Named”, or a galaxy far far away with jedi knights battling sith lords with colorful lightsabers. My friends always laugh and call me a super nerd for loving any forms of science fiction but those movies shape me into who I am today. When I am not on the basketball court or working at In N Out Burger I am either on my couch watching movies or writing for fun. I hope that after I graduate I can turn my writing hobby into a career and impact others the way movies have always impacted me. Instagram: @Princess_Krista11 | View My Projects