Jim Krieg and Eric Carrasco are the great and super writers behind Justice League vs The Fatal Five. The all-new animated film features the Justice League facing a new threat, the Fatal Five, a time-traveling band who terrorize Metropolis in search of the budding Green Lantern. The film arrived in digital starting March 30th and will be available in blu-ray on April 23rd.

Jim Krieg and Eric Carrasco discuss the freedom they experienced when writing the animated film. They tried to stick to the comic book, but they also had room to add so much fresher and new ideas that could surprise audiences and they quite enjoyed that aspect in the writing room. They wanted to explore the Jessica Cruz and Star Boy relationship, which they had fun with. Batman and Mrs. Martian will also have a mentor relationship mixed with a little humor. Eric talks about his little Geek out moment when seeing Wonder Woman/ Susan Eisenberg record her voice over. They didn’t get into Mrs. Martian world too much because there wouldn’t have been enough time to explore her background so no spoilers there for her character. Batman made a small appearance during the interview then vanished like always delivering some laughs. 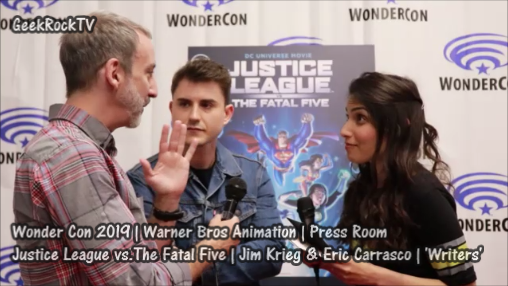 Both Eric Carrasco and Jim Krieg have had their share of massive experience writing for the DC world. Jim Krieg is also a producer for many DC shows and others that aren’t, like Spooksville. He has written Green Lantern: Tas, Justice League Action, Gotham by Gaslight and my favorite Scoobynatural! Eric has written episodes for Supergirl, Tactical and Justice League Action Shorts, just to name a few.

Host: And now, the Justice League, they’re facing a new threat, the Fatal Five! What can you tell us.

Jim Krieg: Way to sell it.

Eric Carrasco: This is good. Do the trailer.

Host: I was…I was practicing.

Jim Krieg: In a world…

Host: You know, Jim knows I’m a big fan. So, what can you tell us about this particular movie and how does, Green Lantern, Jessica Cruz and Star Boy fit into all this.

Eric Carrasco: Uuu, Starboy is easy. We’ve got the Fatal Five who are coming back to mess things up for our heroes. But that also means that Starboy has also come back in time to help with that battle.

Eric Carrasco: So that’s how Starboy fits into the story. Jessica is a new member of the Justice League and she’s not sure why the ring chose her.

Eric Carrasco: she doesn’t feel like the bravest person so it’s an interesting choice that the ring made to make her a green lantern and so we’re exploring that in the movie.

Host: Ok, great. Now, where did you guys draw inspiration considering the fact that it’s kind of like an original story?

Jim Krieg: It really is like picking different things off the shelf. I mean, Eric did a great job of picking up a lot of ideas that were kind of out there and spinning them into the same story. You know making one story out of many.

Eric Carrasco: That’s the freedom of it, instead of dancing between the raindrops of continuity or trying to be shot for shot loyal, panel for panel loyal to a comic book, we were able to take from the entire breath of the DC universe and so there’s green lantern mythology and Legion of Superheroes mythology and it all just came together in this sort of just cool way.

Jim Krieg: You know what’s nice, it’s sort of being faithful to all these stories rather than being faithful line by line. A lot of times when we adapt whole graphic novels or whole story lines, people are like oh, you have to do it exactly or I will be harmed in some way but you can’t because you can’t pack it all into the 72 minutes.

Jim Krieg: So this was kind of freeing in that there was not a panel by panel thing that we were following short of.

Eric Carrasco: It’s a little scary in some ways but it’s also so liberating.

Host: Yeah, I don’t know how you deal with the fans, you know, they’re really passionate, there’s so many things they want to see.

Jim Krieg: We love them.

Host: And you guys just deliver

Jim Krieg: Also we are fans.

Host: That’s true, it does help doesn’t it?

Host: So now, what is the important message you want to come across to the audience? What’s the overall theme?

Jim Krieg: There is a theme.

Host: What is the theme?

Eric Carrasco: Oh boy, that’s a good question. Umm, we’re sort of exploring, without spoiling too much of the movie, we’re sort of exploring the Jessica Cruz, Starboy relationship and he some ways is forgetting who he is and is meant to be and she is in some sense discovering it and so we get to put them together and put them in a journey together to kind of realize who they are and the fatal five sort of allows us to do that in a really exciting way, it’s about who gets to me a member of the justice league, new blood into the justice league and about what the justice league leaves behind for generations in this case all the way to the 31st century to inspire a new league of Superheroes.

Host: Speaking of the Justice League, you guys got the jail you trinity back, Susan and Paul-

Eric Carrasco: Yes we did.

Host: What was it like bringing back those guys and working with them again.

Jim Krieg: It was alright.

Eric Carrasco: It was alright.

Eric Carrasco: I don’t know if it will make the commentary or not, I don’t know if they’re going to edit or not but currently when we recorded the commentary track for this movie Bruce full on makes fun of me for how much I geeked out for Susan Eisenberg’s voice record because I came in, she started singing and I was like its wonder woman. It’s what I hear when I read the comics and it was incredible and so I, haven written Justice League fan fiction as a kid, having grown up watching the cartoons, having these voices in my head for such a long time this was just, I can’t say enough things about it.

Host: You’re kind of going along with every question I’m about to ask next. Uh, is this the continuation of the Justice League unlimited or is it a contained story ?

Jim Krieg: I don’t know is it?

Host: Spoiler alert. Guess we’re going to have to tune in for that surprise. Uh, who’s your Justice League line up and how do you guys come together with this particular one.

Eric Carrasco: My ideal Justice League line up is this one exactly. You know, you always think and I’m sure people at home have done it but you’re ready and you know your ideal justice League roster because you get the figures when you’re a kid and you chose who’s going to be on the team, um, this is what I trained for I’m ready for this and then I completely spiraled and freaked out. I don’t know who to pick, who do you? The only thing we knew for sure, gotta have the trinity.

Eric Carrasco: And we were desperate to do Jessica Cruz but uh, you know Mrs. Martian came around because we were big Justice fans.

Host: Is she going to reveal herself to be a martian by the way? Is that a spoiler?

Jim Krieg: Is that a spoiler? Uh,

Eric Carrasco: I’d say it’s a non spoiler because it doesn’t actually come up in this movie. There’s no white martians per say in the DC AU specifically. There’s a different origin story for Mars and for John so we don’t get into it for that reason.

Jim Krieg: It would be a long explain, in the middle of the movie and she’s kind of there-

Eric Carrasco: I’m a queen but I’m actually not. We didn’t actually get into it. She has a different role to play. She has a kind of wonderful relationship with Batman in it. He is her mentor and that’s interesting-

Eric Carrasco: It’s really funny and it allows Kevin Conroy to do some stuff that he doesn’t often get to do so that was pretty cool too and then filling it out Mr. Terrific?

Host: I love him.

Jim Krieg: And (inadauble) I don’t know if that’s a spoiler, I guess it is. Opps.

Host: Last question, I don’t know if you guys heard but Batman is celebrating his 18 birthday!

Jim Krieg: Batman is right behind you.

Host: I noticed that, and we’re invited to the Wayne manor, how are you planning to celebrate or what are planning to toast with him as?

Jim Krieg: Well, I have my ascot…my, my, my, man stealing my spotlight thunder.

Eric Carrasco: Every time I try to toast to Batman I turn around and he’s gone.

Host: He totally photobombs me everywhere I go, it’s so strange.

Jim Krieg: Batman! He did it again.

Host: Alright guys, be sure to catch Justice League vs the Fatal Five coming to you in digital on March 19, and Blu-ray April 16. Hopefully, I got that right I probably didn’t but don’t worry I’ll correct it on the website and thank you so much guys for joining us