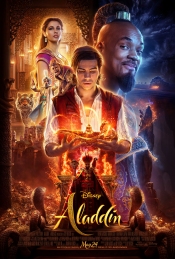 Get ready to hold onto a Magic carpet where you will be taken on a journey with Aladdin. For those who are familiar with the 1992 original animated film, this live action does its best to showcase the similarities with modern twists in music; while, also acknowledging how culture is today. The film itself tells audiences this retelling of Aladdin in its own unique way from the beginning to end through the perspective of Will Smith’s Genie. Naomi Scott and Mena Massoud’s roles as Princess Jasmine and Aladdin helped bring a visual representation of the characters that reach to older and newer fans.

One of the things that his film has done is to reflect some important discussions in today’s world regarding Women, Culture and Traditions. This film does so with Naomi Scott’s Princess Jasmine. Today, Women aren’t seen as ‘traditional’ who are silenced, obedient, and must stay at home. Women are thriving in their careers, using their voices and taking actions to make differences that impact others. Naomi represents Jasmine with the message that knowledge and using your voice to influence change is important. Princess Jasmine wants to improve the lives of her people, especially those who are poor and keep peaceful relationships with other kingdoms. She wants to become Sultan despite the tradition in her culture of having to marry someone, as its the husband’s expectations to fulfill that role and take care of his people and his wife. She “needs” a Husband to take care of her.

The new song Speechless expresses how Princess Jasmine will not be restricted despite other people’s objections. Today, it is inspiring for young children to see strong, brave, smart and powerful females in and outside of films. Princess Jasmine communicates with others in order to help save the ones she loves. Ultimately, her father grants her the permission to become Sultan for the next generation of their people. This is significant when it comes to breaking traditions and how it reflects in today’s world revolving cultures and people. Everything in life is constantly changing and although in some cultures, families, relationships, etc. may have traditional expectations regarding how to live life, this film does a good job in representing a generational theme and a strong Female Princess who deals with traditional expectations while fighting for what she believes in.

Mena Massoud’s Aladdin did give off the nostalgic and familiar boyish persona of Aladdin that was first introduced in 1992. He is phenomenal showcasing his singing talent. His voice and acting did well in representing who Aladdin is. The songs he sang was able to capture my attention and focus on the characters, situations, setting, and emotions. His role also accurately represented the lesson of when someone has more money or power, they change. Some people who have acquired power or money may lose their original sense of self in order to get what they want. This is accurately portrayed in both Aladdin and Marwan Kenzari’s Jafar. Their dynamic does showcase Good vs. Evil but also test the fact of choices one makes.

Jafar is not satisfied with all the power he receives and continues to want more. This is a familiar issue represented from the film that deals with real life where if one has such power or money, they use it as if there are no consequences. As it additionally does represent people in the real world who will continue to want more power and control. These characters did a good job with how I was able to invest my thoughts into their story, ideas, and emotions.

Will Smith’s Genie has also had that effect on me. Will Smith’s Genie is different from Robin Williams and it is important to point that out because of the high expectations that fans have. Although it is not like Williams, Smith’s own version is just as entertaining. It reminded me of his Fresh Prince’s persona which did fit his version well. Both musical numbers from Massoud and Smith are engaging, as it did put a smile on my face throughout the story. It’s actually Genie’s perspective that take someone into this retelling of a familiar story by looking at it through his lens. Smith is represented with CGI effects for his role to resemble the blue and powerful Genie, but we were also able to see more than that. We saw the Genie in Smith’s human form but also in his funny persona while singing, rapping and dancing to the songs that hold a modern twist of hip hop. Smith’s entertainment and efforts for this version of Genie is something I highly appreciate.

This film was, in my perspective, cute in its own way. The music especially had me engaged throughout the story. I am listening to some of the songs on repeat from “A Whole New World”, “Friend Like Me”, “Arabian Nights”, and “One Jump Ahead”. I will admit that I was skeptical, but it was an enjoyable film to see. There are things in this movie that did well for how its structured like the beautiful settings, music, actors and the direction how the story is told. It isn’t like the original and nothing can touch that. For those who are deciding to see this film, keep an open mind and look at some things that you can point out about this that may surprise you.