At San Diego Comic Con 2019, we got a chance to get an exclusive interview with Austin St. John (Red Ranger) and Karan Ashley (Yellow Ranger), the original cast members from the Power Rangers series. Highlights of our discussions includes spanning from their thoughts on the resurrection of the franchise, what it means to them contributing to their roles and even a little TMNT (thanks to the crossovers!).

It was just recently announced that Power Ranger Beast Morphers has been picked up for a second season and the nostalgia for people who grew up in the 1990s continues as their childhood heroes Austin St. John will be back to reprise his role.

The current series Power Rangers Beast Morphers can be seen on Nickeledon.

Host: How has San Diego Comic Con been treating you guys?

Austin St. John: You gotta have at least one black belt just to make it through the cracks.

Host: How many times have you guys been here because I know you’ve been here for a while but you’re starting to come back on tour lately?

Austin St. John: Yeah well, Hasbro just announced that I was coming back to the TV series. I’ve been with the Hasbro panels and doing their private parties and putting out tons of press so next season, season two of Beast Morphers .

Host: I can’t say how excited we are for Red Ranger to come back finally, you know we sign those petitions, you have no idea. So how has San Diego Comic Con compared to all the other cons? I’m sure you guys have been around.

Karan Ashley: You know San Diego is like the mecca, I mean any kind it goes five days it’s like anything any exclusive every fandom it’s all under one roof so it’s bananas.

Austin St. John: Yeah I mean New York is the biggest in the world, but San Diego is the biggest industry show and it’s apparent I mean you walk around all the big hitters, Mattel you know name one they’re here.

Host: What does it take to be a Power Ranger? Just you know for the young ones?

Karan Ashley: Well first of all you got to be a teenager with an attitude and we had that we had that cover. And I guess you got it you gotta want to be a superhero and I think every kid at some point tied that towel around their neck, so you know you gotta fight for good.

Austin St. John: Listen to mom and dad the first time you gotta get good grades and you gotta be willing to beat up the bad guys. Which I’m pretty sure everyone wants to.

Karan Ashley: Which does not include your brother or your sister. Bad Guys only!

Host: Let’s talk about a flashback, did you guys think about that crossover with space?

Austin St. John: Tell you what I mean I’ve loved everything that Turtles have ever put out I mean, since the beginning so they never disappoint me on any level

Karan Ashley: Yeah it was epic I mean obviously Power Rangers and Ninja Turtles had to join forces at some point so it was pretty epic.

Austin St. John: I mean like the only thing missing from that would be like Chuck Norris.

Host: Is there like a dream team you would love to see the Power Rangers go up against?  A pretty good job with that with Jason Frame?

Karan Ashley: I think I think the Power Rangers could take on the Avengers, I definitely think that could happen. We have big weapons and big swords.

Host: How has acting or as a Power Ranger enriched your life both as a person and spiritually as a person yet?

Karan Ashley: Man, you know what it’s just amazing anytime you get to do something where your always creative and you get to do something you love. I always say the day you find the job that you love you never work a day in your life, so for us we’ve had an amazing time and it’s really cool doing Comic Cons because we kind of come full circle you know when our fans were tiny little kids and now they tell us what the show meant to them. And little did we know that the show really resonated with them so it’s such a beautiful thing and it’s like we get to smell the roses. We’ve become Power Rangers every weekend in every city in every country we’re traveling the world doing this stuff so it’s really really cool. it’s really impacted our life positively.

Austin St. John: I think one of the things it just makes my soul happy to see the smiles on, you know full-grown men and women that approach and they’re trying not to geek out or break down into full tears you know and I mean I can’t tell you how many grown men you know fall on tears and snot and I’m holding my baby and we see it all over the world so that for me is job satisfaction.

Host: Yeah I’m not trying to fangirl right now you guys have no idea but if I could ask you one last question not sure what that is but I think security’s telling me she better get going. If guys can teach me how to morph?

Austin St. John: Okay – all right… so what it’s going to be is right hand this is where it is and left hand is up and then it gets a little more complicated

Host: That was so cool, thanks so much guy. Make sure to catch Austin St. John coming to you on TV, check local listings, it will provide that information Karen thank you as always and Austin thank you so much for coming back on tour, I’m Machelle Noel with Austin St. John and Karen Ashley and hopefully we’ll see you guys next time!

Austin St. John: And then “Monsters at Large” with Lionsgate. Came out last year and that’s a fun one. Then I just released my global video game “Battle for the Grid”, so I’m all over the place. My jewelry line, “Jason’s High School Graduation Ring”.

Austin St. John: Yes, so I put the Red and Gold Ranger, the King Ranger on the side and it’s Morphin time on the crown so and you so. I’ve got a bunch of stuff if you go to my website, austinstjohn.biz, you can find all sorts of stuff. 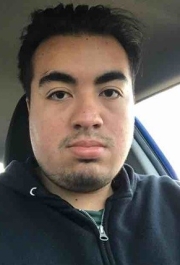 Pablo Diaz | Writing Contributor
B.S | Communications | UC San Diego
Hi, I’m Pablo Diaz, I’m a four year student at UC San Diego. I will be graduating in June with a Bachelor of Science with Communication. My desired interest has always been the journalism industry as I feel like writing is a perfect way for one to express themselves. Join GeekRockTV is the first time I’m getting my feet wet when it comes to internships so I don’t really have experience when it comes to joining a team. I really hope to learn a lot from GeekRock TV and hopefully this can help me in the future in regards to writing and technology. The career goal for me is to become a sportscaster or sports journalist because sports represent me as a person. I love baseball and basketball and it would be really cool for me getting involved in such a capacity. The short term goal is exploring and trying new things as getting familiarized with the different realms of the world can make one a well rounded person. So I am really looking forward to this and with positivity anything you is possible.