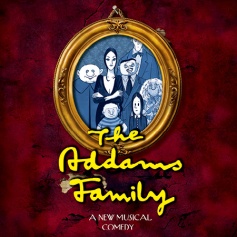 They’re creepy, they’re cooky, and they’ve got a tap-dancing Grim Reaper with them. If you were a fan of the 1960s tv show The Addams Family, or the slightly more modern 1991 film, then you’ll love the Welk Resort Theatre’s performance of the Addams Family Musical. The Welk Resort in San Diego presents a nice system in which you can enjoy a delicious salmon meal at the Canyon Grille and then walk next door into the theatre to enjoy a show. If you’re not in the Halloween spirit yet, stepping into the theater will surely change that. The gray-toned set design presents a giant mansion in the middle of a spooky forest, all complimented by the eerie blue and purple lights that illuminate the stage. While the sets and props serve their purpose well, the real contribution to the ghostly aesthetic of the show is…well, the ghosts! The ensemble cast consists of the Addams’ dead ancestors, ranging from a 1920s era flapper to a wild caveman, all in their historically accurate costumes, with white and gray tones to match the color of their makeup and hair. Their presence in the show not only adds to the visuals but also to the theme of family.

The story begins with Wednesday Addams, the eldest daughter, in love with a boy named Lucas, whose family she has invited over for dinner. She tells her father, Gomez, that Lucas has proposed to her. Her and Lucas want the families to meet first and get along before they tell them, so she implores Gomez not to tell her mother, Morticia, for fear of being embarrassed by her. Morticia is, however, suspicious of Wednesday and Lucas’ relationship, and brings her suspicions to Gomez. Gomez spends the duration of the play feeling trapped between wanting to please his daughter and wanting to be truthful to his wife. When Lucas and his normal parents from Ohio arrive at the creepy manor, natural chaos and, of course, hilarity ensues, as Wednesday tries desperately to make the night perfect and Gomez tries desperately to keep both his daughter and Morticia happy. 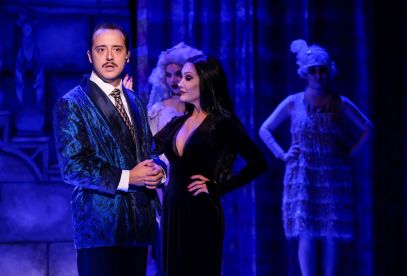 Each member of the Addams family was portrayed wonderfully as the cooky family I and so many others have loved and known. Kevin Koppman plays Gomez as though he had jumped right out of the tv screen and onto the stage. His character’s hospitable personality and adoring love for his wife and family is shown very naturally. This is made comedic with his attempts to befriend Lucas and his family, as well as his building anxiety about lying to his wife. Erica Weisz plays the lovable Morticia Addams with the elegance and power that surrounds the character. Her and Gomez’s Tango de Amor displays both their dancing talent and great chemistry together that they establish from the very beginning. When Morticia finds out that Gomez lied to her, the audience can easily believe the sense of portrayal. The story is told with the help of Uncle Fester’s narration, played by Andrew Metzger.  Not only was Metzger dead-on with his hilarious acting as the crazy Fester (the voice in it of itself was too good), but his interaction with the crowd helped to make the show feel more personal. Kat Fitzpatrick transforms herself onstage as the haggard Grandma of the family, wobbling throughout the story while making entertaining commentary. Pugsley is played by the adorable Blake Ryan who makes the little brother of the family lovable in that creepy Addams way. Lurch is played by Berto Fernandez who uses his character’s garbled language and slow, minimal movements to make the audience break into laughter. 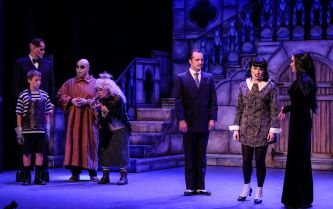 As one of the most iconic gothic characters of all time, Chelsea Franko has a lot to live up to, playing Wednesday Addams, and she certainly delivers. Franko plays Wednesday with the monotonous, dark humor audiences have always loved. Her vulnerable moments- fearing embarrassment from her family, loving Lucas, and being heartbroken when it seems he’s left her- are all easily displayed without breaking the stoic expressions of the character. Her powerful voice astounds all in every song she performs. Despite the show starting with them already engaged, Wednesday and Lucas’ (played by Drew Bradford) relationship never feels forced. Bradford plays Lucas as someone who seems normal, but has the same crazy streak as Wednesday, without making those crazy tendencies seem out of character. Their chemistry reaches its peak in their song Crazier Than You.

Steve Gunderson and Nancy Carr play Lucas’ parents, Mal and Alice, perfectly channeling those cliché “white picket fence” parents. Carr’s Alice has the audience in a fit of laughter in her performance in Waiting.

Overall, the acting, singing, dancing, and comedic dialogue made the show truly a delight to watch. I greatly recommend getting your snapping fingers ready and attending the show! 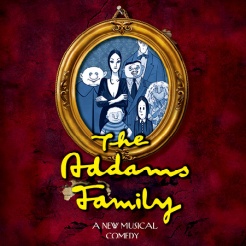 About The Addams Family:
The Addams Family – A New Musical Comedy features an original story, and it is every father’s nightmare.  Wednesday Addams has grown up and fallen in love with a seemingly “normal” young man from a respectable family. When the Addams family plays host to Wednesday’s boyfriend and his family, a series of comical mishaps leads the two sides to learn they aren’t that different after all.

Tickets are selling fast. Book yours today to make sure you don’t miss out on all the fun!

About The Welk Resort Theater:
The Welk Theatre is back! This beloved theatre closed in early 2018 for a lobby renovation and a reorganization of their production team – the theatre is now better than ever with a beautiful new lobby and the return of its original show producer who produced the musicals that we all loved for so many years. The Addams Family is an award-winning Broadway musical comedy based on the beloved 1960s television show and depicts a ghoulish American family with an affinity for all things macabre. In the upside-down world of the Addams family, to be sad is to be happy, to feel pain is to feel joy, and death and suffering are the stuff of dreams. But, ironically, this quirky musical investigates how important acceptance and love are in any family. We’ll have great seats at the intimate Welk Resort Theatre in Escondido. Prior to the matinee show, enjoy an included 3-course waiter-served lunch with choice of entrée and dessert at the Welk Resort’s Canyon Grille. (All Promotional Photos – Courtesy of Welk Theatre)

Vivian Rodriguez | Writing Contributor
B.A | Film Studies | California Baptist University
Hi! My name is Vivian and I am a Film Production major at California Baptist University. I hope to become a director and cinematographer in the future. I enjoy all kinds of movies, from Disney musicals to epic Marvel films to sappy Rom Coms. When I’m not making movies, watching movies, or talking about movies, I spend my days at Disneyland, the beach, or the local froyo shop. I strive to find positivity and creativity everywhere I go! My motto in life is from the book of Romans 12:21, “do not be overcome by evil, but overcome evil with good”. Instagram @vivianrcdriguez | View My Projects